Whats on the workbench then.

As a break from lists and gaming, I thought I would browse through what is passing across the painting table(s) at the moment. In no particular order these are.....

Russian 45mm AT guns (front 2 rows) and 76mm Infantry guns. for my russian cavalry division. I've been working on this army before I left Wellington, so its only been 9-10 years in the making. Its all horse drawn as well, which may explain why it is still ongoing. The list is quite interesting as the entire 1944 SH list comes in at 650 points. All H&R. 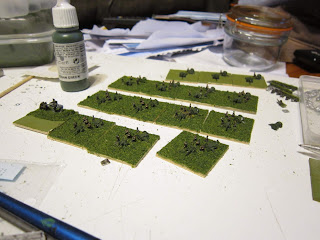 P-47s for my 1944 US armies. the 2 painted ons are Collectair, and the pair in front are GHQ. For some odd reason the Collectair ones had a large out of scale exhaust vent moulded proud of the fusalage which only became a problem when I tried to put some decals over them. A look at pictures then confirmed that this didn't exist, so out with the file and an eventual repaint. for the record, the GHQ models at $6 US each are not that much better than the 80p Collectair models, and Collectair also do the bubbletop version. They do however do the bombs and rockets. 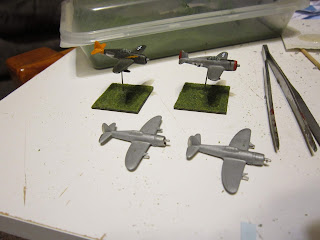 1944 21st Panzer Division. This unit was equiped with rebuilt french equipment, and so has some quite different looking kit. To the left are the SPZ 304 halftracks. (SdKfz 251 equivalent), then a collection of halftrack SPAT, SPAA and MRL's, with some artillery on lorrain chassis at the front.
In the plastic container are some of the base unarmoured halftracks that I brought in error. All H&R (ex armstrong models) and very nice castings. 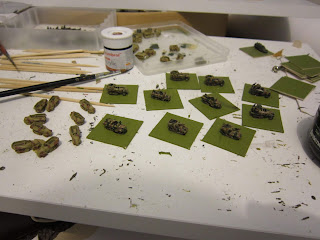 The Austrians. Not the best photo, but its taken me 2 days to work out how to taken decent model photos with the camera......
M60A1 to the left, SK105 to the right, with some M42's thrown in. at the front in the middle are the $K$ APC models, which I must buy some more of. Again all H&R and new mouldings which are very good. 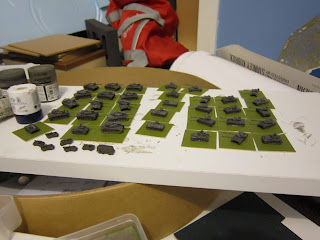