SPI games as a campaign base.

Something most SH/MSH players attempt at some point is some sort of campaign. This normally founders on not having any sort of system to generate the games. Keith came up with "Race to Leningrad" based on a German Panzer division advancing towards Leningrad (surprise surprise). The Russian forces were randomly generated. I can't remember how the terrain was set up. I borrowed the idea for an MSH campaign "Race to the Rhine". 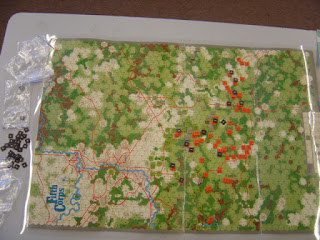 Here we see a game in progress with the Soviet attack underway.

The problem with these games was the execution. There was not much detail on the maps and it was difficult to generate maps on the fly as we did back then (remember this is going back 10 years). The battles that were chosen were the ones that we thought would be interesting on the table. Without a decent terrain system this was not much good.

As the Russian player on more than one occasion I felt that shifting games to the table did favour the side that had a grasp about what was required in the greater scheme of things. Thus there was one large 2 day battle where all the Russians had to do was sit back and wait as they were holding one shoulder of the main breakthrough. In this case NATO had to make all the running and the result was somewhat of a disaster for them. when you have 1 Leopard II facing a tank regiment advancing down a road something has gone horrible wrong. Likewise attacking defending British troops with 10 Hinds ( I recall it was Jakes fault) was somewhat overkill, and gave the defending players a nervous tic whenever any Russian players started making helicopter noises over the rest of the weekend.

With hindsight here is a list of things I would look at to give the start of a rudimentary translation system.

1) A system to match the games fatigue system with the troops deployed on table in a set way. I recall we tried dicing for each stand, but this took a lot of time and resulted in some very odd results. maybe a system where at each level the battalion/regiment has x number of fighting platoons and a selection of support stands.
2) A better way to generate terrain for the battle. Google maps is handy for roads, towns and woods but not for topography (hills). I'm wondering if a variation on the Scenario generator system could be used, with a set number of features per 2' dictated by the terrain hex type.
3) A set way of translating the table results back into the campaign.

Theres some initial thoughts, though I suppose I need to pay the game a couple of times to get a better handle on how the mechanics actually work.