For some odd reason I've collected a few reconnaissance battalions from several nations. I guess its because you get a bit of TOE and equipment variety in the MSH lists that's missing from the largely vanilla main units.

Tonight I thought I would run through my US cavalry units. the TOE for these changed quite a bit between the early 1970's and mid 1980's. Models are Heriocs and Ros (of some vintage)
In the mid 1970's the US cavalry units were stuck with 2 relatively useless vehicles in the M114 scout and the M551 light tank. In 1975ish they finally ditched theM114 and replaced it with more M551's (which at least had a decent gun, even if it threw out the optics and electronics when it was fired). This brought up the M551 numbers in a platoon from 3 to 6. Each troop had 18 M551, 3 M113 scouts and 3 M106 mortars.My chosen unit for this is 1st/4th Cavalry(known by the nickname "quarter horse") which was the divisional cavalry squadron for the 1st Infantry division, VII corps. It was also the last unit in USAEUR to trade in its M551's in the middle of 1979.
3 troops and I have not added in a SHQ yet. I also need to do some work on the bases 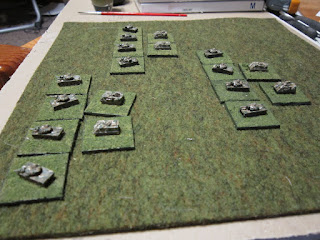 When the M551's were turned in they were replaced with 12 either M60A3's (V corps) or M60A1's (VII corps). 3 M150's (or later M901's again in V corps) were added. The chosen unit for this incarnation is the 3rd/12th Cavalry ( no idea what the nickname for this unit is) which was the divisional cavalry for the 3rd Armoured division (for which I have the 1st brigade as well). For this unit I have also added the 4th squadron which was equipped with helicopters from the late 1970's. 8 AH-1's, 8 OH-58C and 4 UH-1's with an infantry platoon. No idea what use you might find for this on the table. 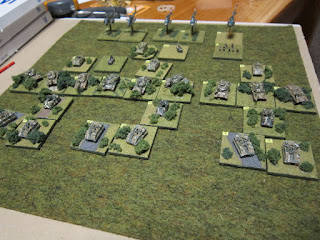 I've also made an error model wise by using the M113 ACAV (models from GHQ) version for my scouts. it was invented for use in Vietnam, but was never issued to units in Europe (if you think I'm wrong, please provide photographic evidence).

In mid 1983 the M60 was replaced by the M1 (105mm version) starting with the 11thArmoured cavalry regiment. I've modeled the 1st squadron ("Ironhorse)". Again I need to replace the M113ACAV stands with plain M113's. 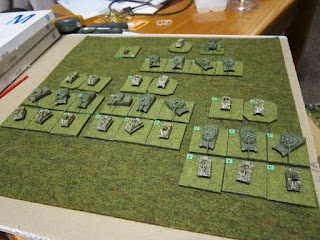 The 2nd and 11 Armoured Cavalry regiment squadrons had a 4th troop which was a tank company. they also got a battalion of artillery in M109's.The M1's were delivered to Europe in US forest green paint only (despite what another wargaming company might have you believe), and did not receive any camouflage painting until the NATO 3 colour scheme was introduced in 1987 (what was the same for the M2/M3). The M1's are by Scotia (as I don't think Heroics and Ros make an original  M1, just the M1A1)
Posted by RAB at 11:36 PM