An update from the bench

You're right about the very hard metal. I've given up on trying to drill it and instead use small magnets glued to the planes and the flight stands to keep the two together during games.

While I've read the story's over the years about how hard the Oddzial Osmy metal is, I've just put it down to pampered wargamers not being able to deal with anything outside lead or plastic. In another life as a railway modeler I've dealt with all sorts of metals. Hell, I've even managed to work with cast bronze, and that's a metal that's best when someone else works with it for you. So, I now report my scientific investigations this afternoon on the properties of the meta.

-It is not melted by a soldering iron (this was quite an eyeopener)
-It won't take solder (even more of an eyeopener as I've managed to solder piano wire before)
-It is tarnished by phosphoric acid (no idea what this means, I only really do Carbon, Hydrogen and Oxygen in my day job).
-My mini drill doesn't seen to do small diameter drills, nore does there seem to be a chuck available locally to do the job. (not a scientific observation, just a frustrating one. back to the hand tools).
-The metal is indeed quite hard. I made up a jig with a couple of bits of wood to hold everything steady-ish while I used my hardcore twist drill to make a hole. 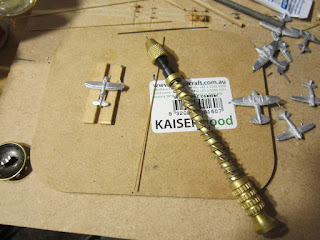 -Drills snap quite easily if you are not overly careful about bending them while drilling.
-drills snap off flush in hard metals (fortunately I could dig it out, so I didn't lose the P-47)

So, after all that, I must confess that I know not what the metal is. I had thought it would be some sort of pewter, but I'm now leaning towards a Zamak (zinc alloy, possibly with aluminum. I'd have to toss some of the flash into some strong acid at work to see if it fizzes). 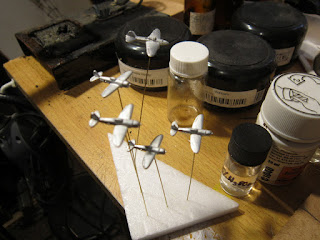 The result of the afternoon. The IL-2 was a sacrificial model that I tried a few things out on as I could live with loosing one.
Posted by RAB at 6:02 PM