A request from a friend during the week inspires this post, and apparently I owe him for making my dice look good last weekend (and he really outdid himself).

During the week I've had the 1:600 aircraft painting bench out. Among the pile I picked out the F4 Phantoms. Once described as proof that with large enough engines you could fly a brick, The F4 served untill the late 1990's with the US and some are still operational over 60 years after the prototype flew.

Surprisingly few NATO nations used the F4, prefering something cheaper like the F5 so I was somewhat limited in options for the paintschemes. So what did we get? (and sorry its so dark,I'm seldom home in daylight in winter) 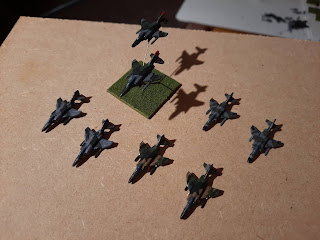 Left to right we have the Luftwaffe splinter camoflage, At the back the Euro one (also called the lizard scheme), the front is the South East Asia scheme worn in Vietnam and then in US based F4 units untill the late 1980's (and hence a possiblity in Europe) which is also my favorite. Finaly on the right is the RAF verson.

Its been quuite fun painting a varity of schemes on the same aircraft. Not overly easy on aircraft from the 1980's. 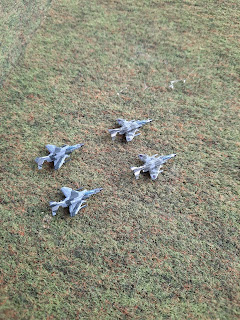 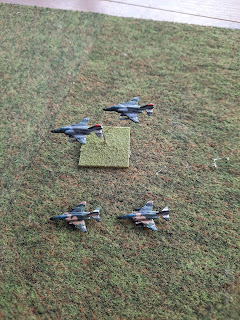