At the painting bench

With my new re-found eye sight, projects have started moving across the bench again.

First up the Russian horde required infantry.  I have had a packet around for a while, and had some SMG troops left from the Cavalry division.
I did some deep thinking about how many figures to put on a base (maybe 10 minutes). This is a balance between what looks good and what I either have lying round, or what my shallow pockets can afford. The number finally arrived at was 7. On the other hand, HMG stands (on the left) always look odd with just one gun team on them, so they have 2 plus an observer. There are also a few of engineer stands and some 82mm mortars to finish up. 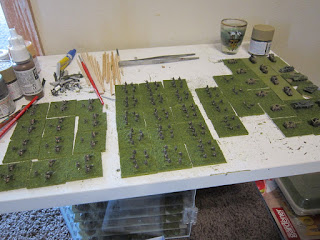 A closer look, though I tend to discourage this. 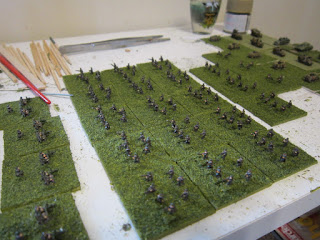 Also in the basing stage were some H&R German SPG', in this case a PAK 40 mounted on a French chassis. 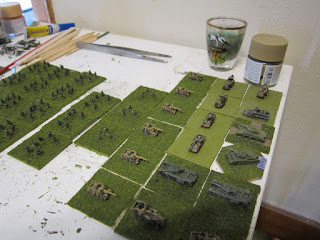 The British stuff has been sitting finished for a while and needs to go back into the boxes.

To finish I'd just like to say that I'm now "on" to Andy at H&R's cunning new sales tactic.  Orders can take up to 2 weeks to dispatch, which is quite understandable for a smaller setup with more important demands on the owners time. However this allows the chance to think "oh I forgot to order that", which is something that we have all done.Now we have the chance to add to the latest order, which I now note has doubled in size from 2 weeks ago when I first made it.
Posted by RAB at 11:23 AM