Terrain Tiles IV. the proof of the pudding....

I took the terrain squares to the club this afternoon for a game of Spearhead.
First up, they went together OK (well just about) on one table. There was a sizable overlap which meant that there was no leaning on the table. There were no serious accidents.

My opponent Jon asked to be Germans. I knocked up 2 different defend lists and a German list I had prevously used here. This one has Pz Iv's. Keith seems to be the only person I know that likes PzIV's. I brought my Russian Cavalry division as I've never used it on table, and as an afterthought packed my US army if I had to defend (I have yet to think out a defend list for the Russians).

So of course I am defending. 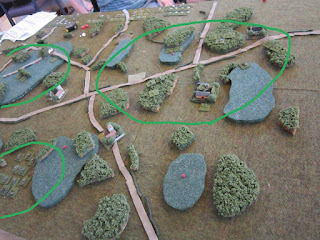 Left flank with most of the support troops deployed forward. 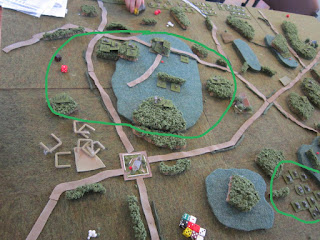 Jons list had 4 battalions of ~11 stands. 1 Pz IV H, 1 Pz grenadier and 2 infantry. His plan was a frontal attack across the front. He used the infantry units on the flank and the armoured units in the center.
As the game developed on the left the german infantry launched an all out assault on the US positions. The US tank battalion attempted to envelope the center thrust at the bottom right. 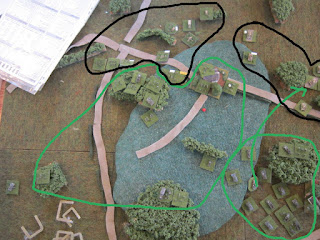 On the right the Germans were flanked by the US infantry who eventually prevailed in close combat. With the movement of the US amoured battalion the center was open for the panzer granadiers 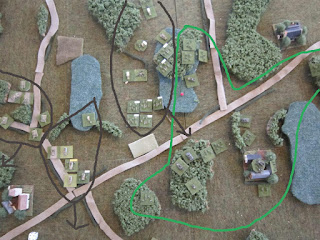 In the center the german armoured attack was flanked by the US armoured battalion. Lead by an M4 Jumbo (US players, don't lead your tank units with anything else) and aided by some bad luck with the dice on the German end the Pz IV's died as usual. 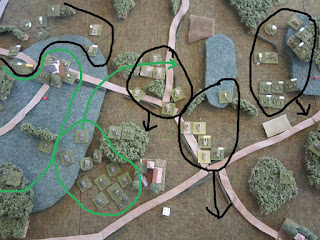 I forgot to record the rest of the game, but the German infantry units were eventually broken by the US infantry. For a change my dice were not abysmal and I didn't manage to slaughter my troops.