Back at the bench

I have not done that much painting in the last 12 months. This has been down to the slow deterioration of my eyesight. Fortunately I'm going towards the longsighted end of the spectrum, so I'm fine functioning in everyday life. the problem arrives when I'm trying to look at things up close....like 6mm figures. Its not too bad painting the AFV's (unless tires are involved) but the men have been a real struggle.
Now I've been trying to avoid accepting this for a while ( I'm Peter Pan dammit!), but last weekend I finally went into the Red Shed optometrist and after a couple of minutes came away with a solution of sorts. 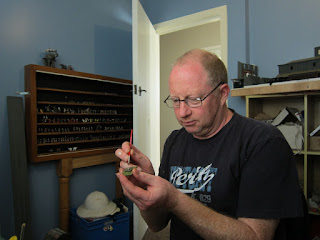 I've been told that they make me look smarter (maybe I should wear them at work).They can be used as bifocals if you push them to the end of your nose, providing hours of hilarity for the lady of the house.

The result is that I finished a battalion of Panzer Grenadiers with supports. For a bit of variety I've modeled the 21st panzer division in 1944. This division was equipped with conversions from captured French chassis. The Half track is the Le SPW 304(f). I've used the H&R GR08 Panzergrenadiers, cutting the standing figures off to fit in the back of the half tracks. 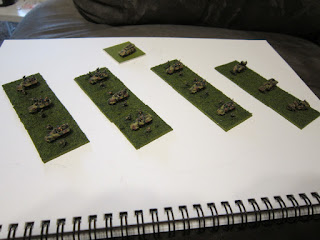 Well, apart from the BHQ which is a Sd Kfz 251/3 C model. It should be the later simplified D model but this came out of 'Der Box'. The stand still needs another vehicle 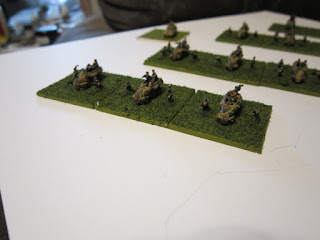 The support weapons are also on French chassis. From left to right they are; a baby neblewerfer, a Pak40 on a half track and a 20 SP mm AA unit. 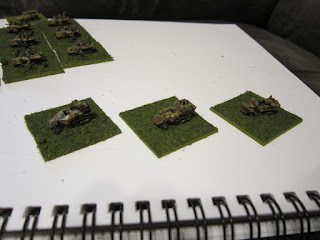 Models are all H&R ex Armstrong models. I still have some other models to finish for the divisional AT units.