So after a week of painting, this week has been a week of basing. I've been using Dopeydog laser cut bases (and hes local to me). I also had to knock out 27 commanders as well. 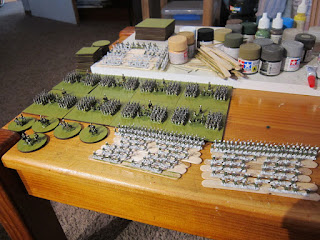 After the glue dried, 8 brigades of musketeers, 4 divisional commanders and a corps commander. I'm almost out of ground cover so I'm just doing the figure bases at the moment. The flags are next but from my initial readings its all a bit of a crap shoot. I've made a start on the jager brigades but I'm tempted to paint some artillery stands or some cavalry at the moment instead.