No update last week sorry. Its taken a bit longer to grind out 4 brigades of Russian jagers than I thought it would. They are based now and its on to the divisional artillery. It seems the Russians liked their artillery 2 centuries ago and not much has changed.

I thought I would do something a bit different for a topic and look at something that never gets talked about by wagamers as its the one thing thats never planned (well, even less than the purchases of lead). We spend lots of time painting and basing figures and less time building terrain, but when it comes to storage we just amble off to a shop and buy whatever plastic system is on sale cos its easy. It doesn't matter if the space is optimised, just as long as stuff fits and its cheap. I thought it might be instructive to share my thoughts on storage by way of illustrating my journey.

Gaming wise I cut my teeth back in the 1980's with WW2 navel (1:4800 local casts) and 1:300 moderns from H&R. As I was playing WRG 1950-1985 rules the AFV's had no bases. For storage I brought some 1/2 inch foam rubber and cut holes in it for the models. The layers were stored in a small suitcase. I have no recollection of where this idea came from (everyone else had chocolate boxes), but it worked, and was expanded to a larger suitcase as I slowly purchased more models. These went into storage in 1989ish.

When I got back into wagaming in the mid 1990's the local flavour was DBM (version 1.3 I think) in 15mm on 40mm wide bases. As I was working at a university at the time that was downsizing science there were lots of old wooded instrument cases that were heading off the building loading dock just waiting to be intercepted. Not as many as I would have preferred but I did have limited space in those days.

Now back in the 90's a typical wargamers transport system was a metal toolbox and figure bases with fridge magnet material. My first decent transport box was a wooden instrument box with steel sheet trays. The trays were cut on a large guillotine in the department workshop. This was used for 15mm medieval DBM 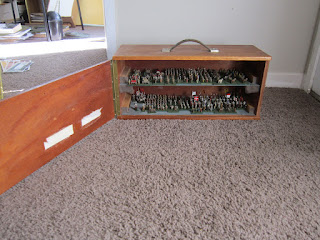 Now the first thing that should be obvious is the less than optimum utalisation of space. A bit of pencil sketching gave me a plan for a mk1 storage box. At the time my preferred/only mode of transport was bus and a large box was not optimal. The box was designed to fit in a backpac (along with the terrain). Again the department workshop came into play and I managed to knock out a job that had my name all over it. The door was even held shut with a rubber band. Despite the small footprint there is enough space for a large 400pt DBM army with baggage. 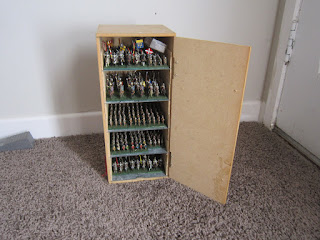 About this time I was introduced to MSH and started rebasing the 1:300 troops. Since they would no longer fit in the suitcase, I needed to come up with a new box with larger layers. And while I can't recall why I chose perspex that was the material of choice at the time. I think I built 3 of the mk2 but I can only see 2 in the room today. 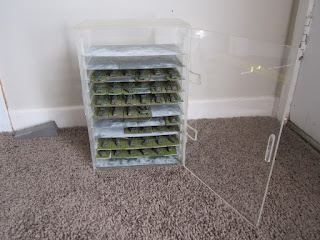 While these boxes were very nice they were not overly cheap and they were still quiet large. Cutting back on the number of layers and headspace while going back to MDF. Not shattering, just an evolution. 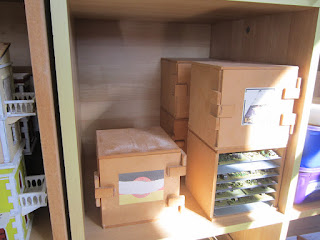 The next step was a sidetrack of sorts, but quite an interesting one that deserves mention. One of our "group" was somewhat of a pedant when it came to gaming "detris" on the table. A trip outside the box one night came up with a tray that could be mounted on the gaming clubs 6' by 4'chipboard tables and used to store all the wargaming bits and dead stands (which our group had a tallent for producing in large numbers). As its not a box it was named after its muse and so we have the mk 1 Harrod here shown attached to the workbench. 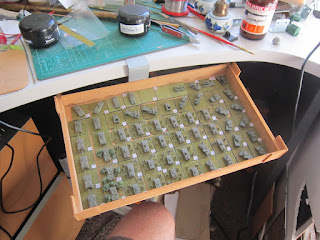 It was a short step to using them for storage. 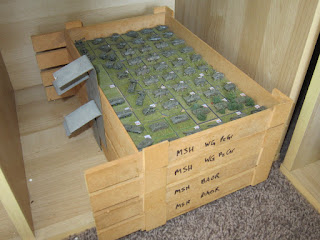 This was also the first time that I moved away from magnetic bases. I had never really noticed any "shifting" during transport of my SH and MSH troops and moving away from steel gave me more options. Around 2008 we were seeing the sunset of the VHS tape and local video stores were getting rid of them. It turns out that they were the perfect size for 1.25" stands (6 by 4). I carried off as many as I could in my backpack on the bike. When I went back the following day they were all gone. 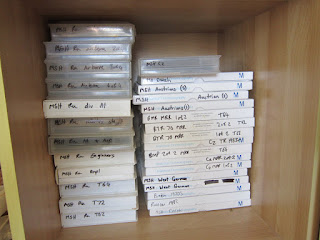 The boxes on the right came from the lab. They are boxes that an organic chemstry lab consumable comes in, and we tend to go through about a box a month. Theres enough space for 6 by 6 stands. They also fit in a microscope box 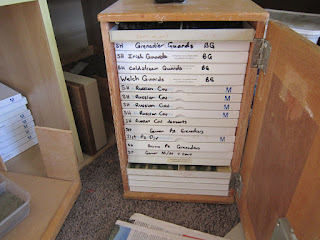 The cardboard trays were hand made to fit and also hold 36 stands.

Moving to my 1813 Volley and Bayonet project I quickly generated a pile of stands and so a new box design was required. Using full sized bases the ideal size was 3 by 3. This seems to work well for typical divisions. Below are 2 Britsh infantry divisions with 3 brigades, skirmishers, command stands and artillery. 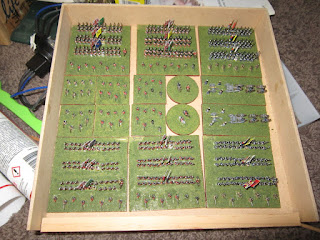 The layer height was chosen to account for the flags. A box is 12 layers thick. So in this box we have the French and friends and the British. 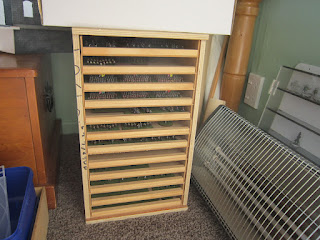 The second box has Austrians and Prussians. 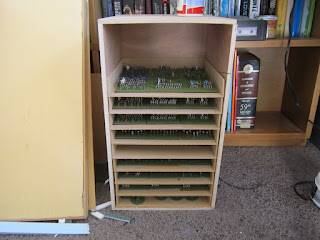 So there we have it. A broad summary of 35 years of 6mm figure storage without recourse to plastic trays.

I'll close tonight with my 25mm figure storage. Wooden boxes were not the only thing that I aquired in my time at Vic. 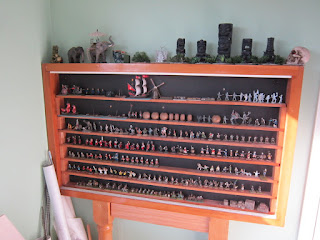