A walk in the light green

Its been 3 months since the last post, or 1/2 a lifetime.

Things started to speed up at the end of March. The week of the lockdown in New Zealand was the longest fortnight of my life professionally as I had to confirm that my lab could continue to test and release product for sale for the foreseeable future ( which essentially decides if the company continues or folds. No pressure mind...). At that point no-one knew what that was going to be. The first couple of days were eerily quiet on the roads although cyclists became a real traffic hazard. Work became a cycle of sanitizer, personal distancing and zoom meetings, even when I could walk down the corridor and talk to people face to face. Both my wife and I had large work bubbles (she at the local hospital, fortunately not on the front line) and it became very wearing mentally. Not as bad as supermarket workers (who I take my hat off too) but still up there. And while I'm well aware that many have lost their jobs (including my brother) I'm not sure if the people who went out the door every day into the great unknown have been as well acknowledged. I sounds horribly trite at the moment but when you spend the evening following world events its always at the back of your mind when you go to work in the morning. However due to some sound leadership the country dodged the bullet and as the numbers of infections have come down so to have the restrictions and the chance to breathe again.

So wargaming wise, I've not managed to do much. I finished painting my Baccus Austrians, managed to get another order in to Baccus in the 4 days their website was open at the end of April, and then wound up painting odd bits to complete the units I had ordered (Vistula legion, Polish Heavy cavalry and Empress Dragoons). I admit I did wonder about the ethics about forcing people to expose themselves to illness while making and delivering toy soldiers to my door in the first couple of weeks of lock done (and still am having some quandaries about it) .I knocked up a storage box for the stuff (capable of carrying 108 brigade stand equivalents). It’s handy having a bench saw. 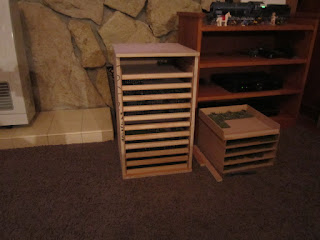 I even started doing odd things like some Tamiya British destroyers I had picked up a long time ago.


One of the things that the lockdown did spur on was contacts with friends both old and new via videoconference. I finally brought a smart phone (those who know me will be surprised) which has proven to be a handy wee tool. I was lucky invited to join a Friday night chat sessions with a group of gamers from mostly New Zealand but with some foreign guests (thanks for this Keith, It was greatly appreciated in early April when I needed a break from real life). I had online beers with friends including workmates (which was really odd), but also those in Japan. One of the scary things we seeing just how much money was in the bank account when all you can spend money on is food.

Oh and last weekend I had my first game against a live opponent since late March.. it was only DBA but its a start.
Posted by RAB at 11:55 PM