One thing that I have never really been happy with is the terrain that we use for our games. The main problem is the disconnect between the figure scale and the ground scale. How do we replicate this while retaining the playability. 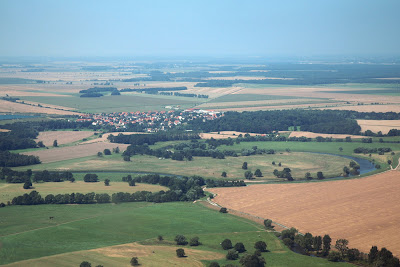 And of course there are variations on the theme, with the following picture having far more straight lines than the first picture. 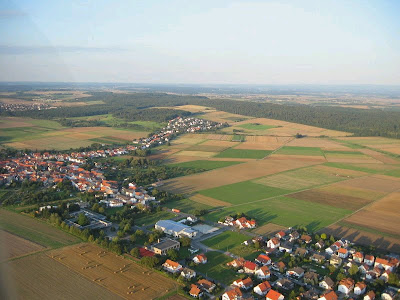 Looking at this picture you can see possibly 3 town sectors joined by thinner strips which could be counted (under the rules) as woods. Also note the straight lines of the woods on the ridge behind the town. 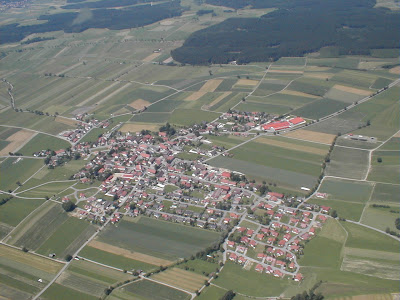 In this shot the woods edges are not as linear. The town is maybe 1 sector. Note the patchwork fields as well.
So, how do we attempt to replicate this on the table. After all, if we didn't worry about what our models looked like we may as well play with plain counters on a map. However I do think that we should be able to do better than this. 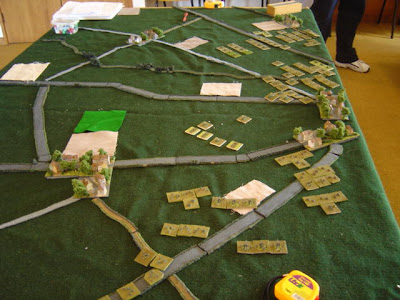 Yes, its bring on the tatty bits of felt time. This was for a historic refight (Arras if I'm not mistaken). The felt roads are serviceable at best but still grate on my eyes. 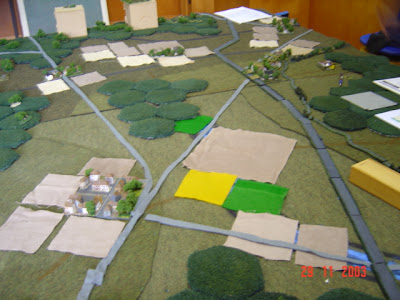 Getting better but still with the felt. 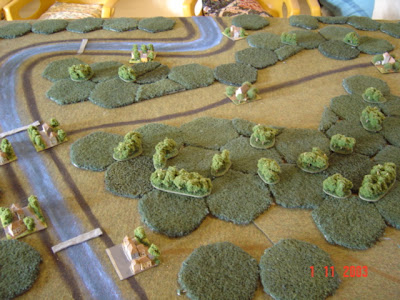 The forest sections were from off cuts of carpet that came from helping a mate redo his flat (as he wasn't allowed to play with sharp objects as he was an academic). I like the 3 dimensional look of the forests here. The hexagonal shape was something that I decided on for areas of forest. it might not look that great, but it works on the table. The roads and river are painted on (from a refight of the Sedan crossings). 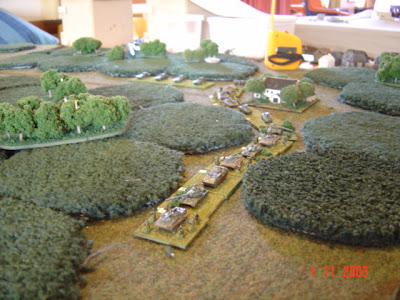 Adding in the vertical dimension improves this visually. 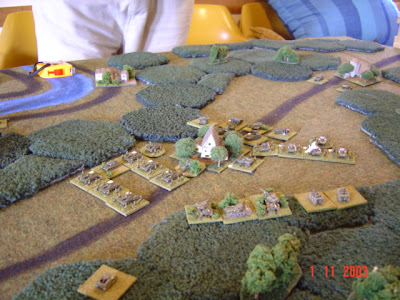 Here we have a US armoured cavalry troop facing off a Russian motor rifle battalion. Looks like I'm having another good dice rolling day. 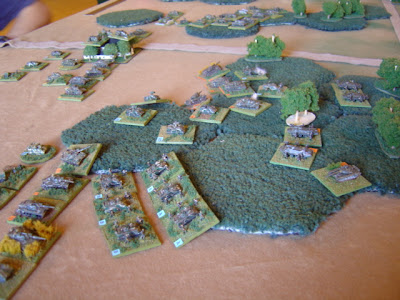 Here we have the problem with 3D terrain, which is what happens when stands transition between the 2. Someone is clearly getting their ass flanked.

My thinking for forests at the moment is a combination of the carpet squares with the tree stands that can been seen placed on top (and I'm not sure why we used them. its obvious that they are forests!). I can live with the stand displacement.

I have also spent some time pondering town sectors. Ideally I would like to keep the 3D aspect but add a flat top to place the defending stands. A clear top could be a possibility but they tend to get scratched and look tatty. A soldered wire armature could be another possibility.

When writing an army lists I find that the biggest hurdle to the process is the 'reading' of the relevant SH/MSH list. Its actually easiest if you have an idea of what your finished list will look like before you start. I've also been reminded yesterday that not only are there minefields in the rules themselves with the relevant bits hidden in a variety of places.

Now, what I'm pondering is creating a set of lists that are easy for gamers to create a list without all the nit picking. the real question is what format would be best/easiest to read. Just letting my brain run at the moment, here is a rough thought.

1 regimental HQ (every army needs one)

X battalions each
1 BHQ
6-9 fighting platoons (or whatever 66%-100% translates to)
0-1 support stands
(as many as needed)
regimental stands s required.

Divisional supports
up to 3 companies each x stands.

then have the various equipment options, or possibly select standard years for gaming (SH or MSH).

I hope that everyone can sort of see what I'm getting at.
this might make life a bit easier.

(I won't be replying quickly as I'm busy playing Napoleon at Borodino today)
Posted by RAB at 10:00 AM 3 comments: