The other project in the last few weeks has been another IHMN company, but one I still have to come up with the details. The start of the project was when I came across some interesting figures which are from an unlikely source. 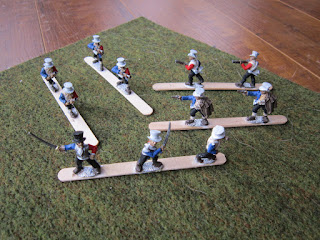 These figures are Front Rank Napoleonic Spanish Militia in top hats. How much more suitable could figures be for steampunk. First up some leaders. 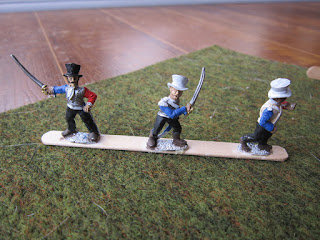 Anyone with a sword will do. Then some sub comanders. 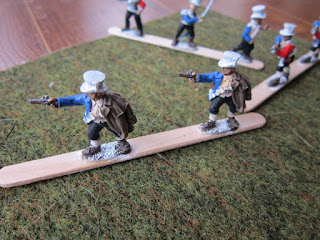 What realy sold me was the figures with short blunderbuses. 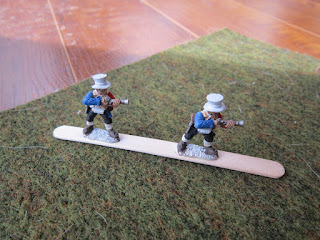 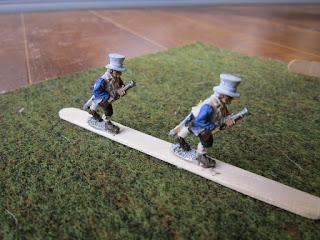 They are handy short weapons which with few modifications could become anything else like arc weapons etc.

As for a company theme something came into my mind surprisingly fully formed. The old Etonians are English private school oldboys, fearless with erudite wit. The rest is just filling in the gaps. The colour patern is the school coat of armsbackground and any ties or cravats will be painted Eton blue (which is a pale green, go figure). I also have to add a white lily on the legs.

Theres a stack of figures out that can be used, all it needs is a bit of thinking outside the box.

Only 4 weeks between posts, not too bad I guess.I have at least been busy with the brushes.

I've worked on a couple of projects in his period. First up....

My DBA project has now taken form. Not a big leap in the end and the choice is 10mm figures on 25mm bases. I have however largely tossed out the suggested number of figures on the bases for "what ever will fit". My interests have always been the 15th century, Romans or hoplites have never really captured my interest. However I did not see the point in replicating my 15th century western european armies.

Back in the day I painted up a Later Muslm Indian army and had some succes with it in competitions (even winning NICON DBR one year using them as Rajputs). I still can't remember why I picked it but it might have been the elephants. I then started painting more Persian horse armour to expand my armies (as the base cavalry all looked alike) untill I had had enough to never touch another 15mm figure. So, having sworn never to paint middle eastern cavalry the army I picked first was Ottomans. There was some method in my madness as the Ottomans had 24 different opponents. 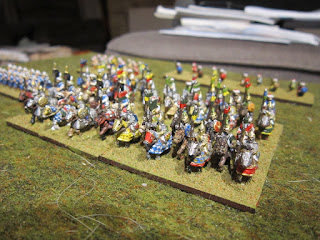 Spahi's. I managed to get 11 on a base with a mix of barded and unbarded horses wi some horse archers at the back. 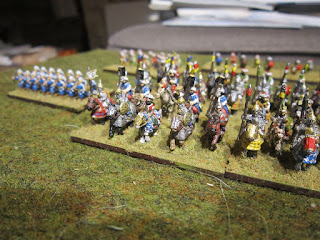 Genneral element. I must do some flags for the second rank. 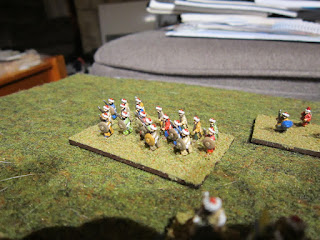 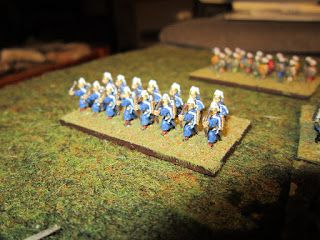 Jannissaries. Historically recorded as wearing blue, green or red, I've just stuck to one colour. Maybe if I paint the rest of the pack. 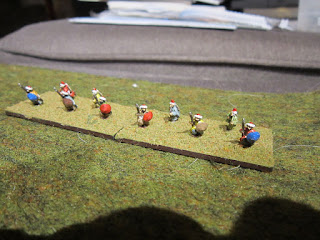 Azabs. The horse archers are on order.

I must admit that I have enjoyed painting these and that 10mm is a better choice for DBA than 6mm for this base size. I've ordered the figures for an opponent which I'll discuss when I have painted them.