A Skype call with Dr U-S at the weekend indicates that he will be in country in a couple of months. This has lead me to thinking about just how to beat the Czech monster. As all my other plans have been beaten by my appalling dice throwing common sense would suggest I should just surrender to save time. However I appear to be an optimist (or 'simple' as one of my workmates points out frequently) so the quest continues.

Current plans revolve around one of my favorite weapons (and possibly the best tank gun ever invented), the British L7 105mm gun. However to face the hordes one needs a cheap mounting. 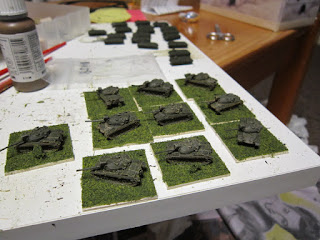 Que the second battalion of M48A2GA2. cheap and with enough armour to ignore that pesky Czech artillery.sucks against CED weapons, but its a bridge I can cross when I come to it.