Only a week late the second package from TTcombat turned up. The second pack was extras for the basic buildings. This was a collection of balconys and window gardens. 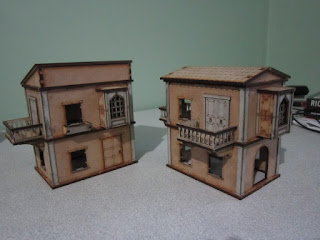 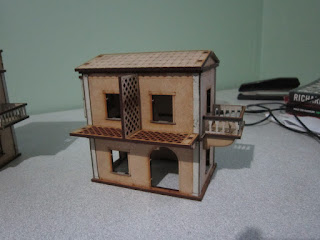 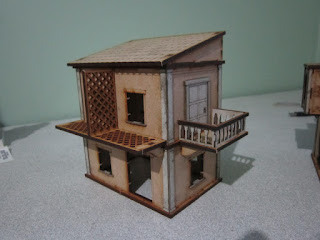 I'm not sure that I would stand on the trelise. The extras add a new gaming dimension to the buildings. Plus the laser cutting and assembly is top notch.
Another set purchased was a set of short walls. Again they are cleverely designed and go together really nicely. 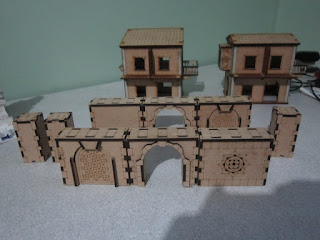 The streets of Venice

A change to a bit of Steampunk this weekend. I have orderd a few things during the lockdown, and they have started to turn up (more on that later).
I'm not sure where I came across these kits, probably on someone elsesblog, but went for a look at the main site, TTcombat who amongst other things do quite a range of 28mm MDF buildings and bits in a variety of themes. I was drawn to the "Streets of Venice" collection. Who doesn't want to send their companies to fight across the canals and plaza's of Venice. And it is particularly evil to not just have pictures of the buildings, but also how they would look in a group if you just purchased another 3-4 buildings. Bastards.
In the end I decided to just buy the simple Venetian houses set (20 quid for 4 buildings) along with a bridges and some additional bits. To record t current state of international post delivery the order was posted 11th June and arrived at my home in New Zealand on the 9th July.

The kits are easy to assemble, each building taking 20-30minutes. The accuracy is outstanding in my experience of laser cutting (which goes a long way further back than you would think). Its probably toxic but I do love the smell of laser cut wood. The buildings come as flat A4 sheets of 3mm MDF. 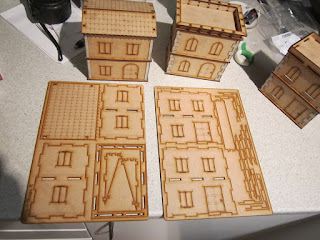 So how do they look with figures?  I had to scale them with the men in stripy pants who, being niminally Ottomans, are at least close geographically.

These are very nice and I'm struggling to not order their large pack to do a 3' square board (buldings, nridges and plaza's) for only 150 quid.

The international postage system seems to be returning to normalish, if a bit slower. However there's still a bit of a backlog to be cleared out. My Baccus orders from late May/early June turned up in reverse order. The main pack of French allies/Imperial guard turned up on Thursday, followed by an email Friday morning that announced that the Prussians that I ordered in the 24hrs that Baccus was open in early June had been posted. Thus I'm now going to have 6000 pts of Volley and Bayonette figures to paint in the lead pile in a very short time.
Posted by RAB at 10:15 PM No comments:

More slow plodding on with the airforces. I've now done most of the WW2 aircraft and based them. Theres still a bit of painting to finish and decals to source. For the older gentlemen at the back with poor eyesight, I'll provide comments.

As the packets come with 8 models, its enough for 2 stands with 4 models on each. The second base of IL-2's is idential to the first. However for the second base of -47's I thought would go out on a limb with the fomation.

Theres another 4 Typhoons that I'm going to have a go at doing in line astern.
Update; yes it does work.
I must go and buy some Germans (bring on Mr Rudel in a Stuka) as well as a few more 1980's Russian helicopters. If only they would do 1/2 sized packages.
Posted by RAB at 3:54 PM 1 comment: