A change from Napoleonics this weekend as I got the soldering iron out and based the SH German air support. First up, the FW190's. Again 4 on a base which is easier when the models are so small.

Cannon armed Stukas, only 2 to a stand this time round. 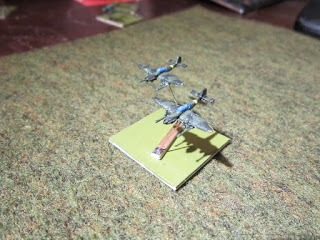 So why not mix the 2. And if 4 is good, surely 5 is better. Rudel makes an appearence with his backup band. 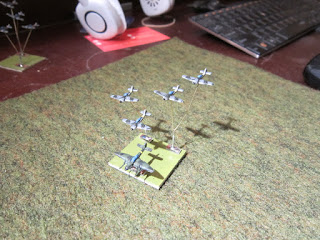 Finally I had a crack at mounting the basic Stuka's in some imitation of a dive bombing attack formation. 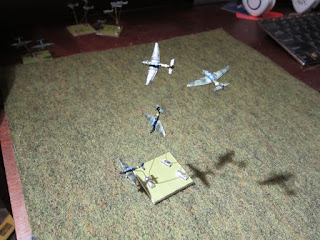 I'm not sure about this but given the limits of the base size it will have to do.

I also had a near first when I dropped an FW-190 under the modeling table. Its the first time I've thought that I have lost a model in quite a long time and it took a hard 10 minute search to find it.

Well, after promising more regular updates, I've then gone and had 2 weeks off. Its a bit like having a GANTT chart at work, which are designed to give managers the ilusion that they are in control when the people following them know that they are obsolete the minute they are done and printed.

Anyway, in the last 2 weeks I've been working on the buildings for IHMN which are coming along but which have developed into a lot of work as they are just so nice. After a week of that I then went back to the Imperial guard to finish up the Chaseurs. For some odd reason this has taken much longer than I expected. However its all done now and the division is complete.

With this division done I've moved onto the Wurtemberg division from 1813. Hopefully this won't grind on quite so long.

And if I didn't have enough to paint sitting round at the moment, I've been pondering a "small" and a "big" project as well.

The small project is an addition to my MSH Warsaw pact forces. I currently don't own a BTR-60 regiment which I could use for either East Germans or Russians from the late 60's to the end of the cold war. Plus I think I can cover the support units from the spares I have lying around.. Polish marines would be nice but I would have to buy Danes as well and that starts being a "big" project.

The big project is a result of my purchase of the DBA V3 rules. I've only ever had the V2.2 rules but a visit to Book depository a couple of weeks back saw this wind up in my cart. I've always wanted to do a campaign set of armies in 6mm on the 25mm bases. And while I have an interest in western european armies of the 15th century, I already have more than enough 15mm elements for anything that I might desire doing. Other possibilities would be something based around the Ottomans or the later Crusades So I'm now waiting for the package to turn up t see just what tickels my fancy so to speak.