Well, another year gone. And with a new year, so should come new projects.

My MSH Austrian project is pretty much done bar the shouting (and an 85mm AT gun that looks like the K-85) and while I probably should add a Hungarian opponent, the Czechs will fill that void for a while. I also have a hankering for Danes and a Polish marine regiment opponets (and the Russian marines as well in time)

Instead of anything sensible, its timefor a new period. I've always had an interest in the Napoleonic period going back to the id 80's with 20mm Airfix plastic and the WRG rules. I even had a sizable collection of different figures until they were sold to a friend in the early 90's. Since then I've played in a few Volley and Bayonet refights of famous battles in a variety of scales. In one case this involved the painting of a sizable number of H&R French. Before christmas I took the plunge and ordered some British figures from Baccus just to see what they were like in the flesh.

Now, the advice from Baccus is to undercoat black and then dry brush white to expose the detail. So, I undercoated white and had a wash of thinned smoke to give a better idea of where the detail was. This works really well, possibly better than a black/drybrush system. Even then, I struggled with the initial painting. I've always found that when you paint a lot of figures (like Modern russian infantry) you get into a 'style' of painting ie how you hold the brush to paint particular detail bits. H&R figures tend to be spindly but also have exagurated detail thats easy to paint. Baccus was a struggle as i had a hard time picking out the finer detail. I completely failed to paint the collars and had a very hit ad miss relationship with the belts. After the dust had settled I had done my first battalion. I'm really not sure about the pose as it looks like that they are holding large cutlery 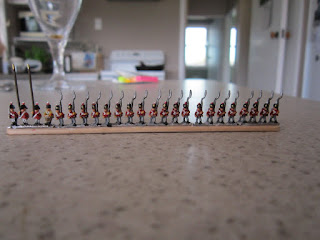 I then moved on to the light dragoon figures. I found these even harder. some detail was really nice (the muskets) but locating the boots and horse tack was very hard. I was also surprised that the horse blankets (an essential part of any 20mm plastic figure)  were just not there. these add colour to the figures.

To the basing. My preferred rule set for Napoleonics is Volley and Bayonet which I have used to refight a few battles. A friend lent me a few bases laser cut in 3mm MDF. This is a bit thick for 3mm , but the bases are just so crisp... 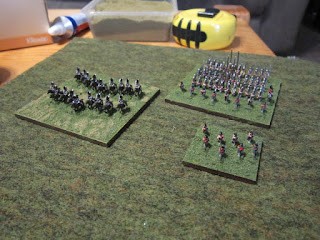