A game or two

A novelty for the blog as I played a couple of games at the weekend.

Paul and Peter came up from Wellington for the day and we got in acouple of games of big battle  DBA.

This was the first time I have had a chance to play Version 3 and I was looking froward to seeing what had changed. Paul brought up his 10mm armies c.1415.

The first game line up. Closer side is 100 year war English on each flank and Low Countries in the middle.On the far side are 2 medieval French commands with Burgudians on the far flank 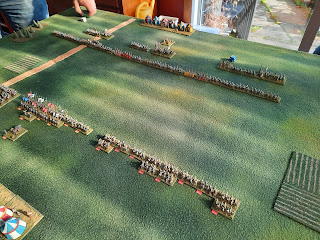 Battle is joined in the center. Theres one plan with pike and thats go forward and try to cover the flanks with the rest of the army. The Low countries command had a single Psiloi element which was the lone light troop on the table, making them king of any bad going (which there was a bit of a lack of). 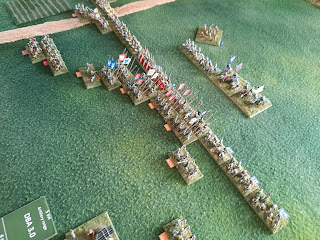 This was a high tide mark for my army as it died in a hail of 1's (which for those of you not conversant in DBX is a bad thing to roll in an opposed die combat system).

A quick-ish fryup for lunc and then a second game where we swapped sides with Peter playing the bad guys and Paul and I taking the French/Burgundians. 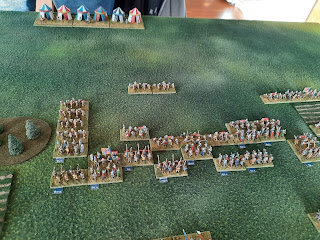 This possibly went worse than the first game as at one point all 3 of our commands were one stand off breaking and we had killed 1 stand of English.

So having played 2 games of DBA 3 I'm quite comfortable with the changes that have been made in combat factors and results.

I'm now pondering starting a DBA project but I'm not sure what form it will take. I do like the look of 6mm troops on 25mm bases (having a knights of St John army done for 20 years and a pile of lead for the Ottomans). I did consider the possibility of rebasing my 15mm onto 25mm bases (which woud give a similar look to 10mm figures on 15mm bases). This quickly ran into an issue of not having enough figures to do even 1-2 armies well and the price of 15mm figures (Essex now 8 foot for 4 quid).

Email ThisBlogThis!Share to TwitterShare to FacebookShare to Pinterest
Labels: DBA

It's surprising how much you can do when you are avoiding other jobs.

So this weeks "avoiding the Landwher" project is the Prussian artillery. The castings are Bacus 1st generation with separate wheels. After doing 16 pieces I believe that the devil has reserved a specially warm spot for Mr Berry downstairs.

Seven battalions of foot artillery. Six line and one for the guards for which I will have to come up with a visual difference 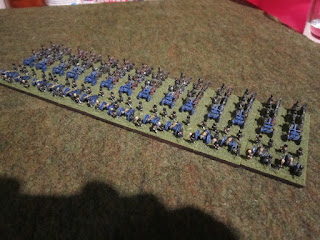 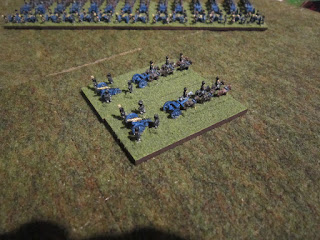 So thats all the artillery done

And just to suprise you all I have made a start on the Landwher infantry. Its a bit grinding painting 288 of each bit but te jobs slowly getting done.

After a solid bout of painting over the last couple of weeks, I've now finished painting and basing all the 1813 Prussian cavalry lead in the current lead pile. It`s amazing what you can do when trying to avoid painting 12 battalions of Landwehr. 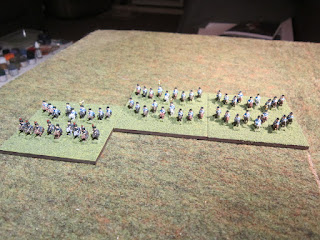 2 Brigades of Dragoons and a mixed Dragoon/Uhlan brigade. I think the coat blue might be a bit bright buts it was was the closest thing I had in the paint collection. 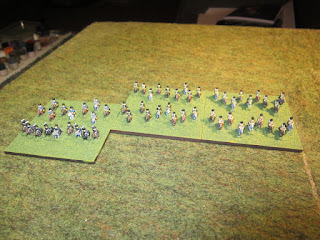 2 Brigades of Hussars, again with a mixed Hussar/Uhlan brigade. 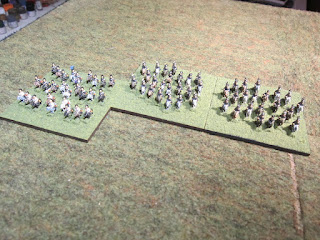 Finally a couple of brigades of Landwehr cavalry (not as organised as the regular troops above). on the left is a brigade of Cuirassiers with the Guard du Corps in white coats at the frone and 2 other regiments behind in blus coats.

Maybe I'll look at some artillery next.....