After My concience asked the question in the last post, I had a quick look on line to see what was avaliable information wise. NowI'll state now that one should take any published TOE (including this one) with a grain of salt.
I've always been of the opnion that if you don't want to know/hear the answer to a question  you shouldn'e ask it in the first place, but I digress.

The sources are from the Nafzinger collection, and from a Russian contributor on the Axis History forum. Mostly they agree. I'll list the Nafzinger list and note differences from the Axisforum list in brackets in red.

1944 Cavalry division.
Divisional HQ 1 cavalry stand.
There are also a selection of vets, bakers etc, which you could model by having another couple of Cavalry SMG stands if you wanted.

3 Cavalry regiments.
In my reading I have not come across a 'Guards unit' with 4 regiments. Any units aquiring Guards status just seemed to be renamed.
RHQ cavalry SMG stand
4 squadrons 3 cavalry SMG platoons. This is an assumption on my part as no breakdown is given.
( 4 cavalry SMG platoons, 1 HMG/cart).
AT platoons are listed but they would be part of the cavalry stands AT factors.
1 squadron 3 HMG/Cart
(already accounted for)
1 AT battery 45mm.
(same). No calibre mentioned in either list
1 battery 76.2mm with no further details.
(Named as a regimental gun, which could be a reference to the 76/16 Infantry gun).
2 82mm Mortar /Cart
(same). Nafzinger doesn't list these on the list but they are present in the weapons breakdown.
1 Engineer cavalry platoon SMG
(same).
Nafzinger lists 2 other platoons but no information on what they might be (the regimental dancing Cossack platoons?)

So, there we go. mostly the same but the devil in the details.
There are a stack of other platoons (gas defence, Medical, Vets etc) which I have not included here. I would imagine in combat they would be subsumed in the fighting stands.

Next time I'll cover the higher level Corps setup.
Posted by RAB at 11:20 PM No comments:

Dr U-S has asked for a list for my Russian cavalry collection.

Its fairly simple, but I'll go through it anyway.

First up, when I write a list for an army that has a points modifier, I tend to multiply the base (in this case 650) by the modifier (0.9 for regular Russians) to give a total of 722.

As always we start with the DHQ (ie RHQ) stand mainly cos its compulsory (or should be) so thats 5 points plus the 2 SMG cavalry escorts @ 10 which adds to 15 pts.

(The list has 3 engineer cavalry stands listed under divisional companys on the list, but I think that this is confused with the divisional battaion as its about the same size, and it makes no sense to have a company and a battalion of the same size in the division).
Running total 705 pt.

Last up a 37mm AA gun (the Russian version of the 40mm Bofors slightly modified) and truck (someone does get to travel in comfort) @ 6 pts.

So, with everything on the list taken, we get to 711 points, 11 points short. Add in a lone Katyusha (nothing ruins your day like being on the wrong end of an MRL strike) off table @ 7 and its 718 pts.

So, there we go, 109 stands (I was mistaken).
Take an option A with 2 Sturmovics with bombs, rockets or AT cannons (your choice) and another Katyusha off tabel and thats less than 50 points.

No idea about a defend list, I have not thought that far, but SMG's in defence can be nasty if they are in terrain or dug in.

There we go, No special bells and Whistles for this, just large units of cavalry moving at 9" through terrain and dismounting as SMG's. Whats not to love.....
Posted by RAB at 9:52 PM 5 comments:

Email ThisBlogThis!Share to TwitterShare to FacebookShare to Pinterest
Labels: Russian 1944

After the previous post on buying a T55 tank regiment, I was looking in 'Der Room' for something else when I spied this in the stack. 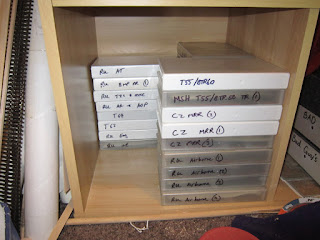 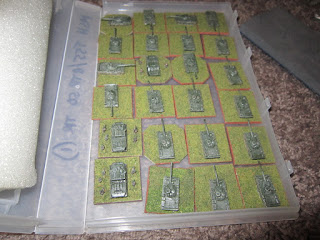 Well, it appears that I already own a T55 tank regimen (with BTR 50's no less). Admittedly they are the older model, but still....
The interesting thing is that it says 1 on the box, so obviously there is a second box somewhere.
Is it in this stack? 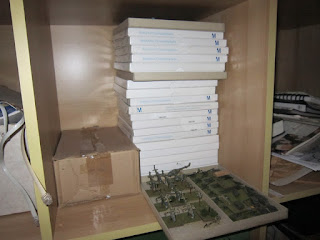 Or in this stack? 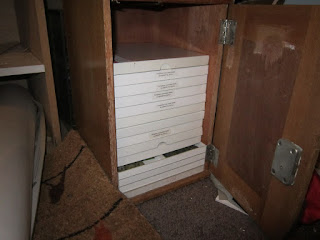 Obviously I need to do a bit more research into local WARPAC requirements before I charge off and shop...
Posted by RAB at 12:56 PM 2 comments:

I've been pondering buying some more lead in the last couple of weeks. Fortunately I have not yet had to spend money as Heroics and Ros are 'on sabatical' while Andy recovers from surgery (which went well and he's doing nicely).

To continue on from my Austrian project, I have been thinking about adding to their opponents. I already have a collection of Czech models which are sufficient without being complete to Lukes army lists and so I was leaning towards Hungarians. While not having a complete list a general collection could be purchased to do the job while waiting for other information to come to light.
I have had a look at the Fire and Fury collection and;
A) Can't quite decipher them in terms of the number of models required as the numbers don't translate to reality sensibly.
B) I'm "quite" skeptical about some of the details. The East Germans did not have T62's in service to start with, and if there are obvious mistakes like that, then who knows whats lurking in the depths.
C) It has to be the most bizarre/arcane/unreadable/confusing way of constructing an army list. it takes 5 minutes just to locate what you are after.

Anyhoo, with all that out of the way, I thought I would start with a T55 tank regiment.

So far pretty straightforward. The artillery battalion is rather a moot point as depending on the sources it either didn't exist, or was just a battery etc. . For arguments sake lets just let it ride for the moment.
The other option would be to have 2 ZSU 57-2 in the AA company.
For infantry support there are some interesting possibilities. Hungary brought 350 BMP-1 in the 1970's which gives enough for about 9-10 battalions plus odds and ends. so 3 regiments in the front line units (5th TD, and the 4th and 8th MRD ). This doesn't leave enough for any sort of infantry support for any of the tank regiments, so possibly add a company (battalion?) of PSZH-IV.

Interestingly if you then purchase a company of BMP-1, A company of BTR-50 (which will have to do until H&R makes a proper OT62) and some D-30 122mm artillery, and you can use the unit for East Germans, Polish and Czechs, as well as 1960's Russians.