I'm on a mailing list for a group here in Palmy that I've been along too a couple of times. I've struggled to find a gaming group since leaving Wellington 8 years ago (wow that is a long time), and its more to do with like minds I think. The games up here tend to be either FOW or fantasy of some sort, neither of which I have ever played (yes, I have managed to avoid Flames of war. never seemed to make sense to me). I've also noticed that they tend to spend a lot of money on models (or maybe I'm just tight) for different games. Now given that my purchases tend to be rather catholic in terms of that I only really tend to spend money with Heroics and Ros 9my 28mm Eureka addiction notwithstanding) I wonder why people would spend large sums of money on kickstarter models that they might only use a couple of times. This then got me further pondering on my collection of Modern Spearhead armies and which ones I have got the most use out of and why. This doesn't count Wargaming competitions where I have been known to supply 1/2 the armies....
MSH
-US. The first modern (it was ultramodern when I brought it) army I owned and the first 6mm figures. Went from being an easy beat under WRG to an army that I like to play under MSH. The variety of toys and list variations keep me coming back. Who could not like M60A2's. All in MERDC camouflage apart from te M1's (Team Yankey please take note)
-Russian. Brought as an opponent to the US army and I've been adding bits to it for so long it has turned into a monster, or at least a multi headed monster. I suppose some bits of it (the airborne contingent) have had far less use than others (the BTR70 regiment) but as it provides 1/2 the forces in any 1980's cold war contest its right up there.
-West German. Doesn't get a lot of use. Odd as I have 3 brigades (2 panzer grenadier and 1 territorial) so its not for lack of choice. I just don't like the TOE as the battalions are too small, and there's just not enough variation in the lists to make it interesting.
-British. I think I can remember using this army once or possibly twice, which is odd as I do like the TOE set up and the variety of kit.
-Czechs. Again I think I have used this a couple of times, but it tends to sit on the shelf as the Professor U-S monster gets the table time (when he's visiting).
-Belgians. I recall there was a stack of stuff going free at the club one day, and I got the French. AMX VCI APC's said Belgian to me, as well as the YPR 765 for variation. I've actually never used this army, though I think its had a run twice in our Mega games.

So that's the complete armies section, or at least ones that I can use for the scenario generation system. there are also a few others.
-French. I have some of the models based for this, but that's as far as it has gotten. Like the West Germans I don't like the TOE or the unit variety. might happen one day, but probably not.
-Austrian. Interesting indigenous kit in the APC's and SK 105. Brought to face off Professor U-S' Czechs. I've just had a look last night and I have the bits for a mechanised brigade. Well, did have as I brought a stack of West German HS-30's as they were the closest thing to a Saurer 4K4 from H&R (and I was not going down the C-in-C path). Well at least until H&R released the Saurer 4K4 in all its variations (and a nice model it is too, I must go and order some...). The territorial TOE is also quite interesting, especially with some older kit still in service (recoiless rifles on jeeps, anyone?) I just have the certain knowledge that the Czech monster will treat it as a speed bump.

On top of this I also have a hankering for Dutch (Centurions and YPR-408), Hungarians (PZSH-IV and another opponent for the Austrians) and East Germans (all that lovely older Soviet kit in T55's and BTR 60's). Its tempered by the realisation that unless my gaming situation changes dramatically ie everyone in Palmy starts playing MSH then most of this stuff is not going to get a run in the foreseeable future. which then leads to the question of if I buy it am I just a collector rather than a gamer. And is one really a collector if the models just sit in boxes for years (which I would term hording). 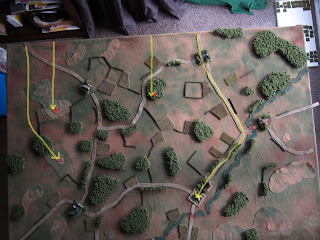 Behind the scenes of creating a scenario

(Its been almost 2 years since the last update. Sufficed to say I have not been doing any wargaming, and Palmerston North is a hotbed of Flames of War. I would play but can't remember 175 special rules at once. Oh and I hate painting 15mm figures. Oh and I refuse to get out of bed unless theres a brigade to command. One must have standards.)

So, how does one come up with a historical spearhead scenario. Its quite way off the standard "lets knock up a game with the scenario generator". It requires time and research plus some play testing to check its OK before exposing it to the world. After 5 minutes of this I'm normally bored and off to the next project.

The closing of the Falaise gap has always interested me as a battle. I also had the troops for a British armoured division, and a wide selection of late war Germans. When Luke decided to visit for a week, and we had arranged for wellington gamers Peter Page and Paul Reynolds to come up for a day, I suggested this as a possible scenario.
A day or so of reading later along with Lukes computer and organizing skills, we had a rough outline of the overall scenario. This then gave me the task of trying to make up the two armies from the various spearhead stands I possessed. The allies were easy, with the Guards armoured division (that I had painted up for a large game based on operation Market Garden) providing the troops for the polish armoured division. I could also cover the American infantry battalion. The problems started when we got onto the Germans. Luke has a talent for asking for more stands of a particular sort. I then get cry's of " you don't own enough STUG's" or some such similar rubbish.
Thus the 7th army was populated with Russian soldiers and cavalry Hq stands. However the 3rd FJR division was populated with lead troops that had seen service in the battle for Crete some 13 years previously.
In order to restrict the movement of the allied forces the armoured units were limited to 2 moved under attack orders.
The next step was the terrain making phase. A cheap bit of plywood was purchased for the 8' by 4' table. The base cloth was one I've had for 20 odd years which is of some material which I have not seen since. Its much nicer than polarfleece. The hills were built up with layers of mid green polarfleece coloured with cheap spray paint. This was then stapled to the ply so that it wouldn't be disturbed as we excitedly rushed round the table. The rest of the terrain came out of my big terrain stash (which seems to consist of a few nice bits and a vast collection of the wargamers standby, tatty felt. I really must do some decent town sectors as well).

In a departure from our normal "It'll be fine" we decided to try a test run of the St Lambert-Chambois sector just to check that the balance was roughly right. this indicated several point that needed to be juggled to 'fix'. I also managed to burn through my years alocation of 6's in a single afternoon.

Apart from this, it seemed to work OK. The Canadians in St Lambert held out against an attacking panzer division. The Polish forces in Chambois could force the Germans north and got beaten badly when trying to close the gap. We didn't play test the defense of pt 262 at the other end of the table but figured that this would work OK. The only changes that we made were that the infantry were to be entrenched. In hindsight we could have done with sightly more area to deploy the attacking panzer divisions.

The rest can be found on Lukes site here. Isn't it annoying how blog posts line up in the reverse order, so thyat you ahve to scan to the bottom to read the first one.
Posted by RAB at 11:53 PM 2 comments: