A couple of weeks on

Interesting times indeed. The world slowly closes down as the borders shut and internationl transport slows to a halt. At work, airfreight prices are going through the roof. A shipment that normally costs $3000 to transport was quoted at $12000 on Monday. "you must be mad" was the reply. On Wednesday it was $15000 and was taken without blinking.
So I've stopped ordering figures for the moment and its time to work through the lead pile and old projects. Having said that, heres one of the last new ones for a while. 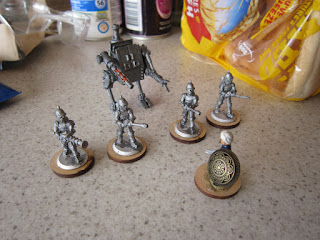 For In Her majesties Name 4 automatons and a nice walker from Ironclad minatures. The walker had a machinegun, but the furture of steampunk demands arc weapons (and steam power..nevermind). I soldered this up while being reminded that plastic rod gets floppy when hot. The man in stripy pants is there for scale.
I'm also reaching the end of the current batch of Baccus Napoleonics. Theres just 3 divisions of Austrian infantry left to paint. So the collection currently looks like.. 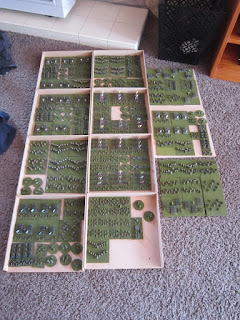 Left row French and Bavarians, center is the British and right Austrians and Saxons. Theres enough for 3000 pts of the a major ones plus 800 pts of the Saxons and Bavarians.
We are hoping to get a game of IHMN in this weekend. I need to check the levels of supplies to build some 28mm terrain and I'm pondering a theatre or museam. It might be the theatre as a museam would need a large whale skeleton hanging from the roof.