Peter, Paul and Peter (that famous 60's pop group) came north for a large game yesterday. It was nice to see everyone again, abiet with a few more grey hairs. After the usual trash talk it was time for business. The table went up in 7 minutes and we were playing the first turn about 10:30, which surprised me greatly.
The general scenario was a Belgian brigade being attacked by 3 Russian regiments. A US brigade arrived during the game as support.
The initial positions were as follows. 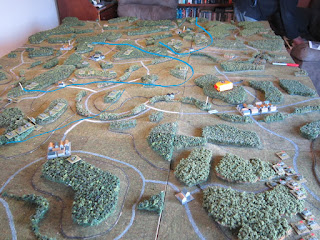 On table just out of shot on the extreme flank was a US armoured cavalry troop which only contributed M551 aluminum fire starters to the day.
Things got going fast on the Belgian left. Here Peter P consults the rules while Paul waves the magic stick and Luke looks on expectantly. 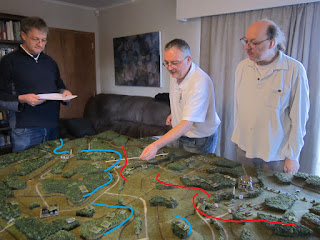 On the other flank Peter C's battalions slowly bashed their way through the rugged terrain (why you shouldn't let just anyone draw command arrows) laying waste to all before them. Fortunately there wasn't that much in front him and it was a quiet trek along the romantic road. The Belgians did quite well considering they are a bit rubbish. The Russian BTR regiment on the right was fought to a standstill. 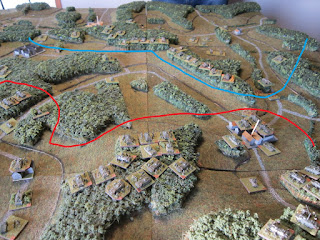 The follow up US battalion took up a strong blocking position, securing that flank from further advances. On the other flank 2 regiments had dealt to the Bellgian units, and were about to roll over the US forces on this flank. 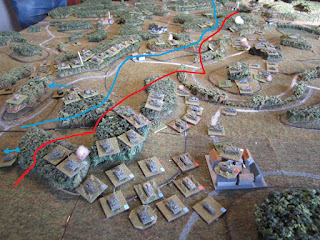 At this point after 10 turns we had to call it. Final score was 10 points to 6 for the Russian win.

Finally, how to hide things in plain sight. 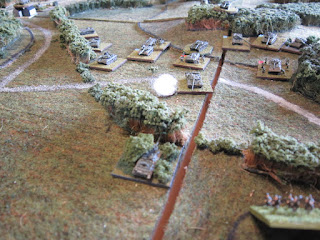 This kanone stand survived a long time by hiding under the foliage behind a wood I must do more stands like this. The Russian players kept missing it, and it kept popping up to inflict another suppression. The gap between modules did not look that bad from normal distances, and shows that an 8' by 6' board is probably just a bit big for this system.
Posted by RAB at 7:55 PM 1 comment: