MSH encounter battle on the road to Bad Hersfeld

I hate to think how long its been since I last played MSH. I think its well over 2 years. My fellow SH player in Palmerston North had expressed an interest in playing an MSH game as it fits with his interests as well. I provided the armies and he supplied the location. I even managed to remember to take some pictures.

the US forces consisted of 4 understrength battalions from the 1st brigade of the 3rd armoured division. Lucky for Jon, he got to command a battalion of M60A2's (I'm a generous sort of guy, and its hard to find the points for 2 battalions of M60A1's). My lists was 2 full BTR 70 battalions with T64B companies and 122mm artillery support, backed up by the divisions independent tank battalion with T62's and 152mm artillery support. The table was laid out and the dice thrown to give an encounter battle with Jon having 1 battalion on table. 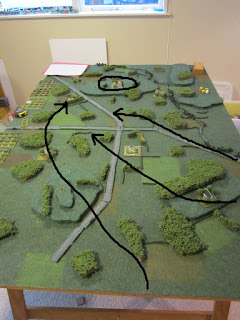 Jon placed his on table BHQ on the far large hill. I looked at the table and pondered attacking across a stream into the teeth of a set battalion. My generalship skills must be improving as I recognized this as a bad idea. I decided to flank march from the near table edge with one infantry battalion and the second across the hill. The T62 battalion would follow on turn 3 down the central road.

So, what was the US plan? As far as I could glean it was along these lines. 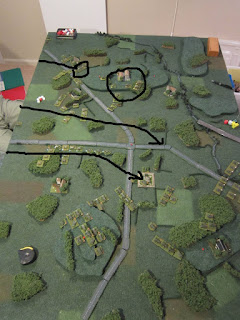 One of the infantry battalions was placed in reserve behind the M60A1 battalion on the hill. the M60A2's got the crossroads (and a meeting with the T62's) and the M113 battalion held the southern flank.  Moving the action on a couple of turns and we get to this... 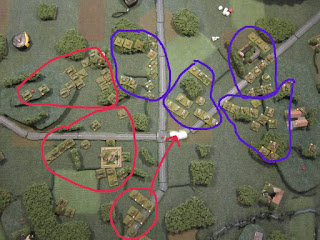 The 2 Russian infantry battalions push in on the left flank while the T62's charge the M60A2 battalion. The US troops on the right flank start moving to flank the Russians but just a bit slowly.

A few turns further on and the fighting got very confused with stands all over the place. 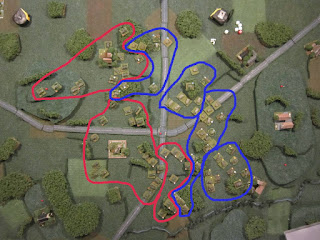 The US infantry was having a great day in close combat with my troops taking a kicking. however direct fire and artillery slowly whittles them down in the top left. The T62's were demonstrating what a bad idea missles in a tank were, and the second largely fresh BTR battalion was positioning itself to take on the flanking M60A1 battalion. For those wondering what the hell is going on in the middle, there were hedge rows attached to one side of the cast roads which severely limited shooting ranges and firing arch's. The M150 stands were also demonstrating how poorly the MSH rules deal with ATGW armed tank destroyers. 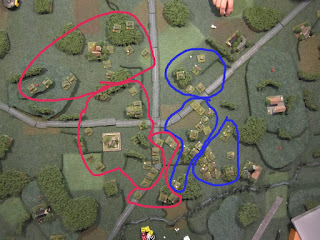 Finally the US infantry battalion broke, and the T62's won a close combat round (the Russians 1st after 5 attempts). The T62's had outshot there opponents, and the Russian infantry was starting to make inroads into the attacking M60A1 battalion. At this point we called the game as I had another appointment. I realized that not only had I not used the Hinds I had, but the counter battery units the US had been given were in fact for the defend list I had knocked up that morning. The counted battery was far less of a problem than it could have been due to a long streak of 1's on the dice. I also didn't make clear enough the benefits of cross attachment at the start of the game which could have changed things if the M60A1's had been more spread out across the table.

Despite this it was a good hard scrap between 2 reasonably balanced forces. Hopefully this will encourage Jon to play a few more games.
Posted by RAB at 10:54 PM 1 comment: