Further work over the last week and I'm now up to 6 boards. 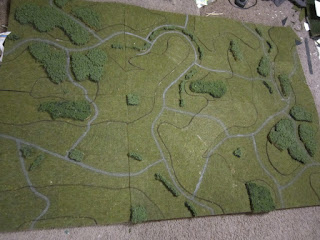 The last 2 boards in the current batch are behind for a variety of reasons. First up I could not find the rare earth magnets in their last location. After turning that area of the garage over twice, they were located hanging of my bike brake cable. Next I drilled the holes for the magnets, carefully arranged the orientations so that they matched the previously made boards. Failed on this point and have had to re glue 1/2 the magnets in.
I managed to pick up some Coir mats cheap and I've been knocking out more forests.

Its time to start adding the woods. At the moment I'm recycling the forest blocks that I already have. Some of these are decidedly odd shapes but I'm managing to fit them in. 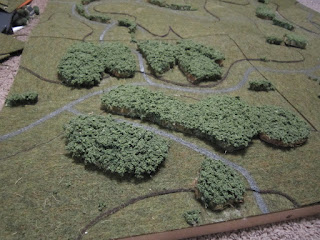 My plan is to make the gaps where the roads cross the ridge lines wide enough to fit a stand in. while it doesn't look quite right, it is more practical from a playability point of view. 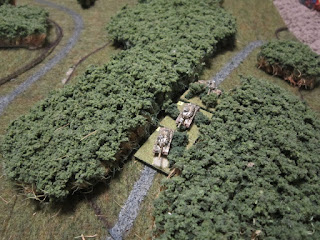 So, with all the forests added here is where I'm at tonight. Luke had a mix of 3 and 4 roads off the board edges, but I'm going to use 4 on all the boards. I also need to come up with something better than just paint as it looks a bit manky up close. 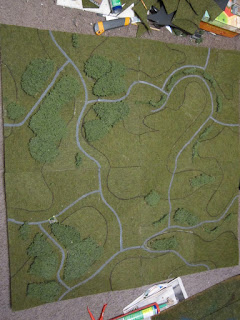 What I'm currently pondering is how I managed to spin out these forests out over a 6 by 4 board. Obviously not enough terrain used on the boards.
Posted by RAB at 8:35 PM 2 comments:

I find that the hardest bit about any project is the first steps. Mainly because most of my projects involve a sizable portion of 'winging it'. Also its very hard to continue on a project when its not playing out how you envisaged it. Fortunately at the moment I'm liking what I see. 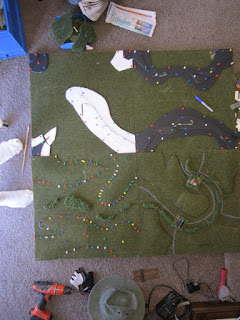 I've done a small amount of preliminary planning for each of the terran squares (while waiting for instrument results. Real life is not like CSI at all), but I tend to go with what I feel would be interesting terrain to fight over. One thing with my system that I feel is a plus is that it gives long ridge lines, which I have not seen before in Spearhead battles.
Posted by RAB at 8:07 PM 1 comment:

One of the problems with living in a provincial city in New Zealand is that sometimes you just don't get the range of stuff that you might get in a larger center. We have just lost one of our 2 model shops (both were good but for different things). So I was after 10mm foam core board but could only find 5mm thick stuff. Its also more expensive than I remember. So a wee bit of a rethink and time for a trial. Using the 5mm foamboard for the underlying topography in 2 layers which I think will work better than 10mm would have done. 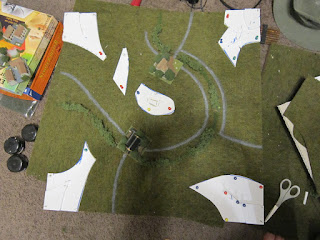 I didn't plan too much, as I'm more of a just cut and go guy. I did "plan" the corners. The hills upper cosmetic edges are 15cm from the corner, and the first and second levels are 10cm and 5cm in respectively. 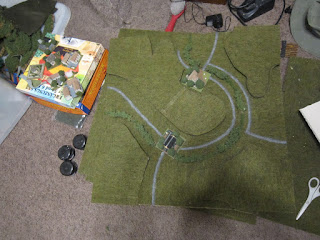 With the hills in place (but not attached as No More Nails does take some time to dry) it does look interesting. I'm going to replace the town sectors with something a bit more "town like" and add more woods etc.
Posted by RAB at 8:38 PM 1 comment:

With 4 weeks before Dr U-S arrives I though I would have a bit of a break with tradition and actually get the terrain done before he arrived. Its a good time saving plan, but has the negative in that he's quite good at making interesting bits of terrain.

After a fair bit of research on the central and south eastern bits of Germany and Austria gave me some base ideas. Generaly hills are covered in forrests. Streams run through the valleys and are the only place you find hedgerows. Appartently in the 1970's Germany went to mechanised farming which nesesitated the removal of the hedgerows. Odd but true.
The strat of the first board. I need a fresher pot of paint to make the roads look better. the trees might ned to be darker as well. 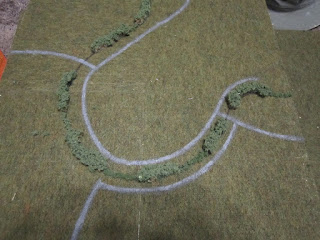 The second board is just started. 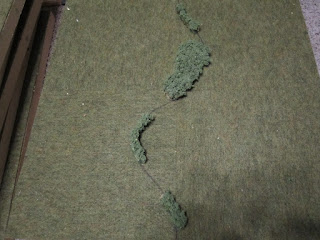 I was going to do some hills tonight, but don't have the bits that I want, so I'll have to make a detour tomorrow on the way home from work.

I've come up with some thoughts on town sectors taht I'll have to try this weekend.