Dr U-S has headed off after a week of gaming. we fitted in four games of MSH, one SH game, two big battle DBA and a couple of day trips as well. Now I'm not the best at summarising battles, and Luke has been doing it on his blog. So I'm  just going to add some photos that I took.

All MSH games werwe set in the 1970's for something a bit different. less ATGW, more RCL's.
game three was Britsh vs Polish

From a different angle featuring some awesome combat dice. An M113 RCL subs in for an FV432 with WOMBAT 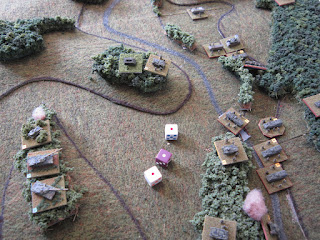 Despite the crap dice the Polish battalion failed a moral check and evaporated.

The 4th game was my first attempt to run a Czech army vs a US force from the 3rd infantry division. I should have got some shots of this game as my M551's made their debut.
Lats game featured some West Germans again agaist the Czechs. The West Germans are an expensive list and I managed to get 28 stands on the table.I used Leopard 1A3's as I have some questions about MSH's dates for thermal imaging on tanks (Chieftain Stillbrew for example).

The small built up areas represents a small village or farm and counts as woods for cover and spotting purposes. Marder conbat teams in a wood are very hard to shift (Def 7) and so the Czechs were pretty much 6's to suppress.So the attackers decided to get stuck in. 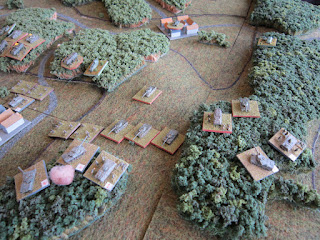 I lost the game at this point by only managing to inflict one casualty in two turns across the whole board.

So, overall a good extended gaming session. I've been quite happy with the performance of my terrain boards. They do take a fair bit of work to do. However, it has been commented on by other local players that we as gamers are quite happy to spend a sizable amount of time and money on buying and painting armys, and then play on a collection of tatty felt. I feel that its a good investment. The saving in set up time alone (less than five minutes) is worth it, let alone the improved visual aspect