A while ago I purchased some of the new modern Soviet infantry from H&R.
These ones are in action poses. 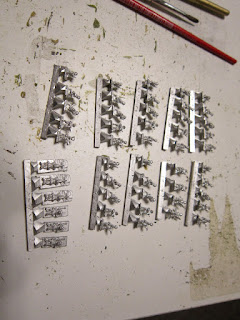 I'm having trouble paint these at the moment. Not because I don't like them, but because I've painted several thousand of the old style figures (all on 10 man strips) and you get into a rhythm. However I think that these are going to be more dynamic on the bases. I'll have to buy some more APC's to use them (possibly BTR-50's).

I also brought some of the SPG-9's which is a 73mm RCL firing rounds similar to the main gun of the BMP-1. This is present in all battalion anti-tank platoons in Warsaw Pact infantry units.


The only way that you could buy these previously get these was in M07 Soviet airborne troops, which was a bit of a pain. I've included a picture of the older model for comparison. 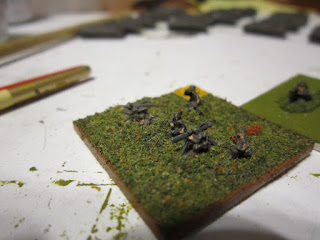 On the table, you couldn't tell the difference.

I now need to buy some Sagger strips. I'm going to mix my AT platoons despite what the MSH lists say.  I still think that there should be a mixed stand with an AT and an ATGW factor.The current system doesn't work at a battalion level.
I also really like what Andy has done with his new releases and being able to buy different strips of support weapons. Its a pain for him, but I guess he can just toss the unused metal back into the melter.

I must look into the new East German figures as its another army (faction I think is the new phrase that I have tolearn) I would like to have. Megolomania knows no bounds....
Posted by RAB at 8:35 PM