I've been pondering ordering more lead. Now normally this isn't a problem as I'll just add to the SH or MSH armies. And over the last couple of weeks I've been kicking round East German and Hungarian army list, and quite honestly I'm not stoked as they essentially are Russians with different kit. And not flash kit either. Their only bonus would be a much larger army on the table which would require more killing. Dr U-S seems to make this work well with his Czechs (which have the added bonus of the vast number of May Day fireworks projectors or MRL's to the rest of you).

So what else would I do? I've always enjoyed playing Napoleonics using Volley and Bayonet rules. While not having had any experience I'm also interested in the American civil war. Likewise Great War Spearhead.

So, while I continue pondering (and the clock is ticking...) I have taken some photos of one of my other collections. This time round its my early WW2 1:300 air combat collection, mostly Battle of Britain. 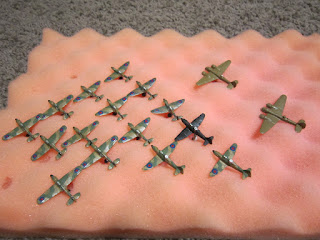 The RAF. Hurricanes, Spitfires, Defiants (who doesn't love a bad idea on the tabletop) and  couple of unpainted Blenheim 1F's 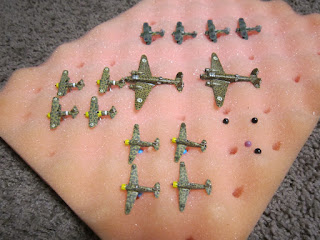 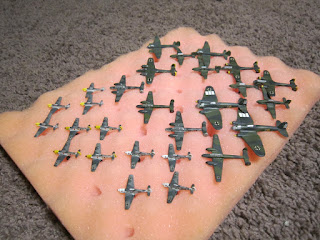 I have previously played using Mustangs and Messerschmitt's rules, but I don't think that these work well for early war. they are also limiting in how many models you can control. Ideally I would like to ba able to control 6-8 planes each. I also want to get hold of a copy of "Battle of Britain " when it is finally released from PSC.
Posted by RAB at 8:33 PM

Email ThisBlogThis!Share to TwitterShare to FacebookShare to Pinterest
Labels: WW2 other