In my last post I provided a sample Defend List based around three motorised Panzer Grenadier battalions drawn from the 1944 Panzer Grenadier Division. In this post I thought I would explore some options for the defend list. 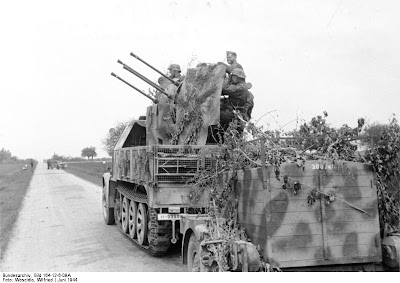 In the Scenario Generation System the core list can be supplemented by either what is called an Option A list or an Option B list. In 1944 the Option A list can comprise 50 points while the Option B 100 points. Now, you would expect that a Defend List to be defensive in nature, however there are occasions when a commander will be forced to conduct limited attacks with these defensive forces and this is exactly what the Scenario System tries to capture. The situations, you may wish to use an option for are:
Given these tactical situations what would some useful reinforcements be? Remember you can have multiple option lists selecting one, or none, prior to the game. I will provide four sample lists to provide some ideas.

This consumes, assuming the guns are off-table and German regulars, a total of 48 points. This leaves only 2 points for some light entrenchments. The artillery are clearly an expensive option but the powerful 150mm guns could be useful in defence or in a a fluid situation.

An alternate Option A could provide some artillery and some additional AA. You may recall that I was concerned about the lack of effective AA systems in my last post. Therefore some Nebelwerfers, from an understrength formation, could form another useful Option A list. Now, before I'm asked the Werfers are not normally part of the divisional TO&E, however I typically allow a Werfer battalion to be considered a divisional asset. If you and your opponents agree then this could provide a useful option

The total for the above is 48 points after application of the various modifiers. Therefore 2 points remain for some entrenchments. This small list is rather useful. While the Werfers can be somewhat irregular in their targeting they can also be very effective, especially against massed infantry in the open. Of course if you are expecting to face Allied aircraft the flak will be extremely useful.

Now one important point here is attachment limits. The Spearhead rules limit the attachments to a maximum of three companies per fighting battalion or the entire battalion. Assuming the Stug's are massed and attached to the weak Panzer-Grenadier battalion I can't allocate the above flak company and the Panzer Battalion flak company as it would exceed the three company limit. However, I can move the Panzer Battalion 20mm flak to another battalion, as it is a divisional support company, and allocate the Flakvierlings to support the Stugs. 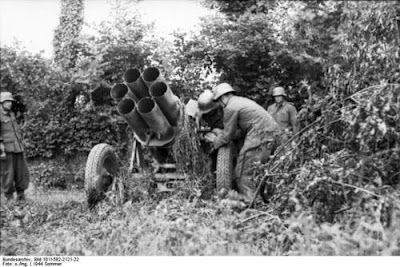 Another Option A list could provide some additional anti-tank capability. Very useful if you suspect your opponent will be using Churchill tanks!

After modification for German regulars the 88s come to 38 points, meaning 12 points remain. These can be used for light entrenchments for the infantry or you may want to consider providing some light entrenchments for the anti-tank guns in an effort to protect them from an artillery barrage which is very likely to be called in on their positions. However, I must add this option is of most use in situations 1, 2 or 3 above and far less so when under taking action in a fliud operational situation as mentioned in point 4 above.

All these troops, including the counter-battery observer, are off-table and all are German regulars. As a result the total comes to 46 points. This leaves only 4 points for some light entrenchments. This is sufficient to entrench four stands of off-table artillery either the 150mm guns of the 105mm in the main list. Perhaps a useful option which may keep your own artillery operational.

I do hope this is useful and providing some ideas. The message I'm trying to get across is try and use the options to supplement your lists in areas the core list is short or that will directly counter your likely opponent. However, consider carefully how you would use each option depending on the tactical situation. In my next post I'll provide some suggestions around Option B lists. Stay tuned...
Posted by TWR at 11:55 AM