I thought my first contribution to "Badly Lead Men" would be a review of one of my German 1944 lists. Being a relatively simple list I thought it would provide an interesting starting point for those considering building lists but perhaps not sure where or how to start. I'll tackle this little project in several parts, but for now I will focus on what I call the "core" troops.

The first thing that you will encounter when creating a German Late War Defend List is the fact there are never enough points to go around. This becomes especially apparent when you start placing troops on the table and you find yourself trying to cover five table objectives. So my first design rule for Germans is that you must consider a mobile defence. Trying to hold all the points is all but impossible, especially if you have armour. Not surprisingly I of course wanted to use armour. By that I don't mean those fancy tanks either, just good old Stug IIIs. With this in mind lets look at my first list, a German Defend List, based on a Panzer Grenadier Division in 1944. 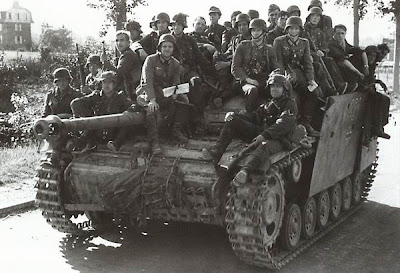 The first component for me are the Panzer Grenadiers. My target was to have three battalions including some armour in the form of Stug IIIGs. This would allow two battalions to be positioned holding objectives and a third either holding ground or acting as a mobile reserve. Further, lets assume it is to operate on the Western front where the risk of all those massive Soviet heavy tanks won't be an issue.

Now, firstly the reader will note the lack of trucks for the infantry compared to the TO&E. In a defend list they are a complete waste of points and as their usage is voluntary they have been removed. With these changes the understrength battalion above adds up to a total 66pts. Assuming the troops are rated as German regular a 1.2 multiplier is applied. The result is an actual cost of 79 per battalion. As I'm having two battalions that's 158pts.

For reasons that will become apparent later I will also take a further infantry battalion, but in line with the under strength rules in the Scenario System, (7.2.1) I will have two weak companies each of 2 stands, along with a further company of three stands. Further, all support weapons have been removed; which is of course the mortar and anti-tank gun stands. Clearly this battalion has suffered heavy casualties recently. Anyway, the result is as follows:
1 x Battalion HQ: Rifle stand @ 6pts
7 x Rifle stands @ 6pts each

The total is 48 points, or 58 points when modified for German regulars.

The total here is 28 points, or once we apply the German regular multiplier, 34 points.

Now lets look at some armour. The armoured element for a Panzer Grenadier Division can be drawn from either the division's Panzer Battalion, some ten Stugs at full strength, or the Divisional Anti-Tank Battalion with six Stugs. As both are divisional assets they can be allocated out as support troops or used as a fighting battalion and cross-attached. For today's example let's assume two Stug companies drawn from the Panzer Battalion as follows:
1st Panzer Company: 3 x Stug IIIG L/48 @21pts each
2nd Panzer Company: 3 x Stug IIIG L/48 @21pts each 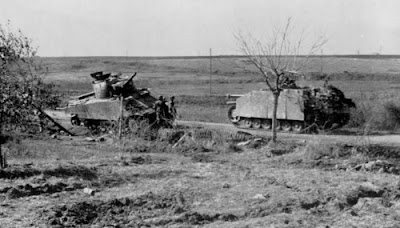 Back to the calculations. Currently we have consumed around 401 points of my 450 point budget. At this point we still have no artillery and little flak. Let's start to address this by adding in a 105mm towed artillery battalion. The organisation and cost for this are as follows:

The cost for this is 40pts. This cost of on-table troops is modified for being German regular, the observer, but those stands off-table are reduced. The final cost is therefore 42 points. Adding this to our total we now have consumed 443 points and therefore we have only 7 points to play with.

Our flak options can find some divisional flak companies or in the Panzer Battalion itself. I'll opt for another 20mm Flak which is around 5 points. I would like more and better flak as the Panzer Grenadiers will be operating on the Western front, but alas I simply don't have the points.

Now you will have realised that some rounding has been going on. However, I run all my calculations through a spreadsheet and at this stage I have used 449 points, one short of a my 450 budget. Of some concern however is I have no entrenchments, or one if I use the remaining point. We could remove one of the infantry stands from the weak Panzer-Grenadier battalions making three two stand companies which would gains some additional entrenchments, or alternatively we could look at some options.

In future posts I will explain some ways of using the formation as well as how we can use various options to change the way we use the formation. In the meantime, good luck planning your own Spearhead list...
Posted by TWR at 9:02 PM