Hello and welcome to the blog. As the title says, the aim is to discuss army lists for playing Spearhead, Modern Spearhead and Great War Spearhead using Keith McNellys scenario generating system. While scenarios should be considered the height of wargaming, at the end of the day they take an awful long time to prepare,and then several goes to get right. I've enjoyed playing Keiths system largely because I can just turn up to a club or competition and play. 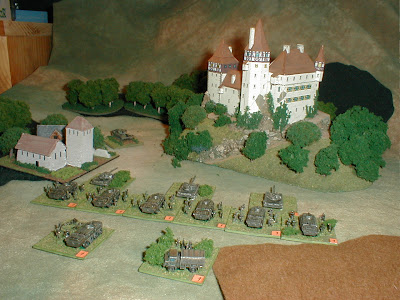 So, what qualifies me to write a blog like this? No idea really. I've just spent a bit of time writing lists for myself and others for casual play and competitions. These tend to be more successful in others hands than mine. I also like to base things 'reasonably' on historical formations, rather than trying to come up with a killer army. This doesn't mean that I haven't 'bent' things, and I don't have an aversion to using King tigers if the occasion demands. Or having late war German units at full strength....

Another reason for writing this blog is that one of the things that stop people from using the scenario system is the need to write a list, and do the maths involved. I've seen people use spreadsheets to do this, I just tend to keep track using a pencil on the right hand side of the page with a running total as I go. I'll expand on my mechanics of writing a list in the not too distant future. This includes important stuff like 'what are the strong and weak points of my army?', and 'just how the hell do you actually use it on the table?' I also am not adverse to sharing 'secrets' as it were about lists I've written.

I'll freely admit that I enjoy far more working from the WW2 lists than I do using the Modern lists. Modern lists tend to be rather 'samie' with not a lot of differences between lists generated from the same divisional list. WW2 has so much more options.Most of my experience is with late war lists as that's my prime area of interest. Likewise the moderns tend to be from the 1978-85 period, which is what I started out with WRG 1950-85 rules back in the days when it was ultra-modern.

What I'm not going to do here is indulge in 'pointless' arguments about the rules, the lists or the scenario system. They are not perfect, but at the end of the day they provide a good game on the table, which is what its all about. I've watched Keiths system evolve and expand over the years. I've even been able to point out gaps or loopholes (after exploiting them :v). It was never designed for competitions, but has survived intact. Hopefully we can get a few more people out there using it.

Keith is also on board as a contributor. He tends to develope lists which are completely different to mine, but his lists tend to be refined by play testing, which I don't have much chance to do at the moment.